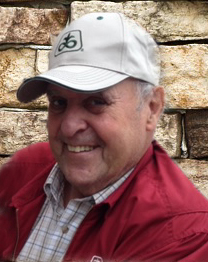 Ron was born November 12, 1935 in Vermillion County, Illinois, the son of Emil and Thelma Browning Wiese. He married Sylvia Uden on July 1, 1960 in Immanuel Lutheran Church in Thomasboro, Illinois. She survives.

Ron was a 1953 graduate of Homer High School in Homer, Illinois. He was employed at John Deere just out of high school and also worked as a welder for Nelson Concrete in Champaign, Illinois. He started with the Adwell Corporation in the Pekin area in 1966. In 1972, he continued working for them as he started farming in Meyer, Illinois. He was a farm manager at Adwell until his retirement in 2005. Ron had a passion for farming and loved spending time on the farm and making sure everything ran smoothly. His love of farming was also evident in his collection of toy tractors.

Ron enjoyed watching college basketball and was a die hard Indiana Hoosiers fan. He was even known to wager on sports games. In recent years, Ron became an Iowa Hawkeye fan. He also enjoyed attending his great grandchildren's sporting events.

Ron was preceded in death by his parents, a brother, Lowell Wiese, and three sisters, Christine Morrison, Joan Tate, and Irma Smith.

Services: 10:00 am on Monday, August 24, 2020 at the Hansen-Spear Funeral Home, with Rev. Patricia Reep officiating. Please bring a mask if you plan to attend the service.

Remote Attendance/Livestream: to attend Ronald's service remotely (or to view a recording for up to 90 days), please join us on Monday, August 24, 2020 at 10:00 am Central Time using the following link: https://client.tribucast.com/tcid/37010042

3 people have supported the family by purchasing them flowers or gifts from the Healing Registry.

thinking of you at this difficult time. i send my deepest sympathy.

I will miss you so terribly. Who is going to tease me about being from Clarence? I hope you knew how much I loved you. Rest In Peace uncle Ron. Traci Uden-Livermore

Our condolences go out to the entire Wiese family. I was very fortunate to know Ron and it was always a treat to bump into him and visit about all the new things regarding farming. We will miss seeing his friendly smile. Our thoughts and prayers are with you all during this time. The DL. Schnelle family

RIP uncle Ron-Lots of crops to plant and harvest in heaven!-Randy and Jenn

So very sorry to hear about Ron’s passing, he was a wonderful man it was a privilege to have known him I have many wonderful memories, he will be dearly missed by all who knew him. Our prayers are with you and your family at this difficult time. Mark and Jannel Vonder Haar

The services for Ronald have not yet been added. Please sign up below to be notified when the services are ready.

The attached photos are added to the memorial of Ronald Wiese to help share their legacy.

Please help memorize Ronald Wiese by recording your attendance below.

Thank you for sharing your memory of Ronald