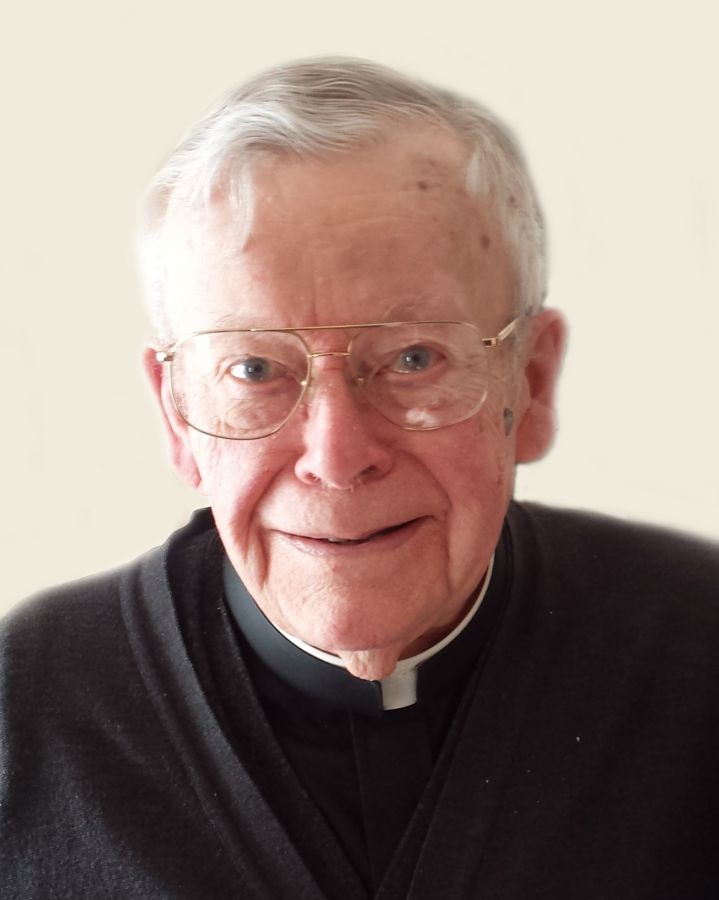 The Rev. Daniel L. Banner, 91, of Quincy, formerly from the Chicago area, passed away peacefully on the morning of Friday, March 13, 2020 in the Good Samaritan Home.

Daniel was born on July 7, 1928 in Bloomington, IL, the son of Francis Lee and Margaret Kendall Lawrence Banner. Throughout his childhood, Daniel's family moved numerous times before settling in Decatur, IL. After attending Decatur schools, he entered Millikin University where he majored in History and English. Upon his graduation in 1950, he entered Seabury-Western Theological Seminary in Evanston. Shortly after his graduation in 1953, Daniel was ordained as both a deacon and priest of the Episcopal Church at St. Paul's Cathedral in Springfield, IL.

Father Banner first served as curate at St. Paul's in Alton, IL followed by a three-year stint in southern Illinois as vicar of both St. John's in Centralia and St. Thomas's in Salem, mission churches less than 18 miles apart. In October of 1956, Father Banner began new duties as curate at St. Luke's in Evanston, serving in this position for three years. For the next eleven years, he served at St. Joseph's on the southside of Chicago; as vicar during its period as a mission church and then as rector until 1967.

In 1970, Fr. Banner accepted the call to be the rector at St. Paul's Church by-the-Lake in the Rogers Park neighborhood of Chicago. During his twenty-two years at St. Paul's, he shepherded the parish through the challenges resulting from the adoption of a new Prayer Book in 1979 and presided over the concept and implementation of an Endowment Fund to provide the church with financial security for the future.

His wisdom, calm demeanor, gentle spirit, and delightful humor made him beloved by his family members and the congregants in every church where he served. Prior to his retirement and subsequent move to Quincy in 1992, Fr. Banner made numerous trips to Great Britain and became a great admirer of Queen Elizabeth and a collector of Royal Family memorabilia. He was an avid reader, an astute bridge player, and a crossword puzzle wizard. His "bow wows", as he affectionately referred to his canine companions Addie and then Queenie, often accompanied him to church and on trips to visit family and friends.

During his retirement years in Quincy, he enjoyed assisting at St. John's and taking communion to the shut-ins at the local Veterans Home. A Golden Jubilee celebration was held at St. John's in the fall of 2003 in honor of the 50th Anniversary of his ordination.

Graveside services and burial will take place at Oak Grove Cemetery in LeRoy, Illinois on Monday, March 30th at 3:30 pm.

A visitation is no longer planned prior to the funeral services, however, Fr. Banner's family hopes to schedule a celebration in his memory at a later date.

Memorial contributions may be made to St. John's Parish or the Quincy K-9 Connection.

Fr. Banner is one of the finest people I have ever had the pleasure of meeting. He has been an inspiration to Joyce and me over the years during his time at St. John's. Always smiling and upbeat, never a harsh word, prayerful, kind, considerate, loving, upbeat, and thankful for anything done for him by others. Words cannot explain how much he meant to the parish and the community. I enjoyed taking him to church on Sundays and taking him communion during the week over the past few years. I will miss his kindness and our times together. A truly good and wonderful man. May he rest in peace. Bob Shackleton

I haven’t been to church since Fr. Banner passed. I am not looking forward to seeing that empty pew when I do return. His voice always comforted me. He was the kindest man I ever met. Our trips to and from church were some of the best memories I have even if we only said the same things over and over during his last days. We lost a truly great man of God. With all my love, Joyce Shackleton!

Father Banner was a Holy man and a fine priest. He was a blessing to me when I arrived at Saint John’s Church in Quincy as he kept me sane during the times from the courthouse to the firehouse. Father Banner would go anywhere and do anything that was needed as a retired priest. He was a blessing to God and His people who represented God to His people and His people to God. He was a man of prayer and that will not stop in the next life as we will have someone we know and love in the nearer presence of God, interceding for us. I will continue to remember him at God’s altar and in my daily prayers. Thank you for your witness Daniel, priest, brother and friend. Pax. Father Herrmann+

Father Banner had a profound positive influence during my youth at St. Jospeh’s Church, Chicago. He was a devoted priest; the genuine article; the real thing, a priest’s priest. I am so grateful for his guidance and his example in faithful service to our Lord and to the Church. His life was one of great service for which I—and many others are thankful. May he Rest+ In Peace.

Our deepest sympathy, prayers and thoughts are with you. Fr. Banner was truly beloved by all.

I had the privilege of meeting Fr. Banner a number of years ago at a meeting of the Catholic Clerical Union, and then as a member of the Society of the Holy Cross. As the SSC Local Vicar, I express to all the family our sincerest sympathy at this time of loss, and want you all to know that we are continuing to remember Father in our Masses and prayers, as well as all of you. With the restrictions of the moment, I don't think any one of us will be able to be present, but know that we are with you in spirit and prayer.
Fr. Michael D. Rasicci, SSC
Local Vicar - Sacred Heart Chapter

My wife Emily and I were parishioners while Father was at St. Joseph's in Chicago. He was a wonderful priest, and helped us as a young married couple. He planted the seeds for my own vocation later in my own life, and I am so grateful to God for setting Father along my path.
The Rev. Canon Edward Ruhlander+

The services for Daniel have not yet been added. Please sign up below to be notified when the services are ready.

The attached photos are added to the memorial of Rev. Daniel L. Banner, SSC to help share their legacy.

Thank you for sharing your memory of Daniel