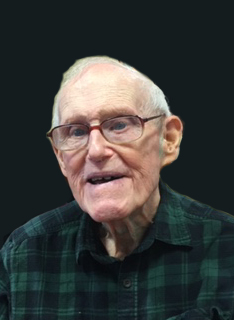 Bill was born March 20, 1927 in Steffenville, Missouri, the son of George M. and Nora "Marie" Gragg Arment. On April 5, 1952, he married Barbara Louise Miller in Quincy, Illinois. She survives.

Bill was a 1945 graduate of Palmyra High School. Bill retired from Gardner-Denver (Cooper Industries) as Assembler-burr bencher. He was a member of Machinists Local #822 and a former member of Lighthouse Baptist Church in Quincy. Bill owned and operated a backhoe service for many years. Bill was woodworker and loved to read. He was a life member of the International Association of Machinist and Aerospace Workers Local 822.

In addition to his wife, Barbara, Bill is survived by two daughters, Becky (Todd) Winters of O'Fallon, MO with whom Bill and Barb made their home for last few years, and Suellen Willis of Belgrade MT; five grandchildren, Rachel (Dustin) Lensing of Belgrade, MT, Capt. Brandon Willis, US Army, of Texas, Ben Willis of Belgrade, MT, and Zachary and Jordan Winters, both of O'Fallon, MO; two great-grandchildren, Eli and Olivia Lensing; a sister, Doris (Ronald) Baldwin Fulton MO; and several nieces, nephews and great-nieces and great-nephews.

He was preceded in death by his parents, a grandson, Seth Willis, and a sister, Darlene Parrish, and a brother, Rex Arment.

Services: 11:00 am on Tuesday, October 8, 2019 at the Hansen-Spear Funeral home with Rev. Tim Dougherty officiating


Hansen-Spear Funeral Directors are in charge of arrangements.

Dear Barb and family. You have my deepest sympathy. My parents, Buddy and Barb, thought so much of your dear Bill. I am sure that they greeted him warmly when he arrived above! So sorry that I was unable to make it to the visitation, but Connie told me she was able to see and visit with you there. Please take care!

What a fine man. I remember Bill and Barbara when they attended Columbus Road Baptist Church. May God give his family peace and assurance at this difficult time Mary Goodwin Jones

Dear Barb,
You have our Deepest Sympathy. Remember all the bus trips we took together.
God Bless
Don and Wanda O'Hara

Becky and family,
I heart goes out to you all during this sad time in your life. Grieving is shared by all, all though in different forms. Please hug your mother, be strong for her, but allow her time to grieve in her way.

The attached photos are added to the memorial of William "Bill" Arment to help share their legacy.

Thank you for sharing your memory of William