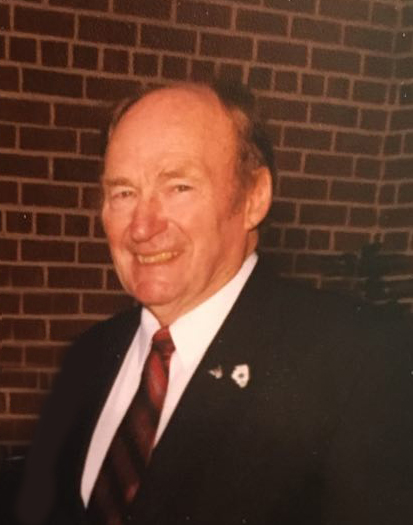 Howard James Dewell, 96, of Quincy died Wednesday, 28 August 2019 in Blessing Hospital. Howard was born November 3, 1922, in Hartley, Iowa; the adopted son of Enoch and Elizabeth Dewell. He attended schools in Sutherland, Iowa until his 10th birthday, when the family moved to West Plains, Missouri. during the 1932 depression, where he completed the rest of his elementary and high school education.

He joined the US Navy in 1942, while attending William Jewell College, and served in New Guinea and the Philippines, on land bases; and the USS Cyrene, for three years. He was also coaching basketball at Liberty, Missouri High School while attending college.

He returned to college after the war and completed his AB degree in English., playing all sports. He married Frances Kathryn Wyss while in college and accepted his first full-time coaching position at North Kansas City, Mo.in 1948 where he coached for four years. He received his Masters degree from Washington University in St Louis.

In 1952, Howard came to Hannibal LaGrange College as Athletic Director and basketball coach, where his teams advanced to the Final Four all four years, playing for the national championship twice. His All-American players, Ray Schumann of Hull; Cotton Fitzsimmons of Bowling Green, Danny Dotson of Leadwood, and Bill Bradley of Bismarck, received many honors while winning 125 games during the four year period at Hannibal.

In 1956, Howard came to Quincy High School as Athletic Director and basketball coach, where he coached four years.

Coach was later appointed Director of Physical Education and Health for the public schools, and then became Dean of Students from 1964 until his retirement in 1982.
He was known as the 'paddling dean' in the '70's and '80's. He was a life member of the PTA.

He married Kathryn Ann Brown in 1972 (she survives). Howard and Kathryn became managers of the Sheridan Swim Club in 1982 and built a large membership, over 100 new members each year, during their 10-year tenure there.

Mr. Dewell was active statewide in the Optimist International Service Clubs, having served in every office at club and district levels. Howard and Kathryn were both Governors during the '90's. He was also active in Scouting for a number of years, and a past member of the Elks Lodge. He was a life member of the Herman Lodge, Quincy Consistory and the Quincy Shrine Club.

Surviving are two sons from this marriage; James Howard (Sheila) Dewell, of Carol Stream, IL and Donald Boden of Quincy. There are seven grandchildren., Katelyn, Brooke, George, and Mackenzie Dewell; and Andy, Heidi, and David Boden.

Having participated in all sports throughout high school and college¸ his love for competition led him to the Senior Games and Masters program in many states. He had been active for 30 years, traveling with his favorite player, Ray Schumann. His energy and enthusiasm were trademarks of his life.

I never met Mr.Dewell yet I sort of felt I knew him to be a good father. I knew this through his daughter, Linda who spoke of her daddy so often and so kindly.
Sandy King, Montgomery,TX.

I was six the first day I rode my bike by Putt-Putt and this man waved to me and told me he could sure use my help. We unloaded some boards and a few cans of paint and little did I know I was the newest recruit into Howard Dewell's army.
That was over fifty-five years ago that Coach Dewell became my mentor,boss, and most of all my lifetime friend. The joy, wisdom, compassion, enthusiasm, and love he so freely gave as he touched so many of our lives. The blessing and impact that Howard Dewell had on my life I consider a precious gift. R.I.P. my good Friend!

As you know Howard was a wonderful man and loved kids and helping kids. I am sure you are very proud of him. We regret we cannot be with you celebrating his wonderful life. We are in Colorado with Family. God bless the Dewell Family.....Mike and Cinda McClain

The QHS CLASS OF'68 wishes to express our deepest sympathy to the Howard Dewell family. He was a great influence to the many students at QHS.

The QHS CLASS OF'68 wishes to express our deepest sympathy to the Howard Dewell family. What a great influence he was to the many students at QHS.

I have great memories of the many fun times at the Putt Putt Golf Courses in Quincy and Hannibal where he managed in the summer time. I worked at the Hannibal location along with my brother-in-law Glenn Murphy at the Quincy location. Sincere sympathy to the family.
Richard and Connie Hadfield.

Dear Dewell Family,
So very sorry for your loss, Howard was such a pillar of the Quincy Community. His devotion to sports, education and Senior Fitness was unending. In fact it seemed he would live forever with his constant spunk and vitality. He was a good friend of our parents, Sherrill and Sondra Hanks throughout many decades. Over the last couple years he and I developed a pen pal relationship exchanging letters about our current as well as past lives, something I'll always cherish. Condolences to Kathryn and the whole family. He was a truly great man.
Krisna Hanks

Larry remembers the putt putt days and we would run into each other occasionally and Howard was always happy to see us and took time to visit with us. A true gentleman and he will be missed. Condolences to family and friends.

Dewell Family,
Howard was truly "ONE OF A KIND". Guess we thought he would live forever but memories of him will remain.
Dick & Pat Wentura

Dewell at the Pool was my first boss throughout high school and college. He taught me so many life lessons and I will forever be grateful. We wrote back and forth every year - a few months ago he sent pictures from the Sheridan days! Rest In Peace Howard. You will be missed. ❤️

Dewell at the Pool was my first boss throughout high school and college. He taught me so many life lessons and I will forever be grateful. We wrote back and forth every year - a few months ago he sent pictures from the Sheridan days! Rest In Peace Howard. You will be missed. ❤️

Dear Kathryn, Linda, Jennifer, James and Donald,
We are saddened to hear that your family leader has passed away. His long life importantly touched the lives of so many. His good natured personality allowed him to never meet a stranger.
Thank you Howard for the tremendous part you played in the education of Quincy youth at QHS, Sheridan, Putt Putt, and Senior Olympics.

So sorry, Kathryn. Howard was a special person. Our kids grew up with him as their “boss” at Sheridan. Even I worked part time under him. Howard was such a giving and understanding man, especially when it came to kids. He had a terrific and very successful life. Such a wonderful person.
God Bless! 🙏🙏🙏

A constant presence in my formative years at Sheridan and in my neighborhood on Grove Ave. My condolences to Kathryn, Jim, and the rest of the family. -Hobe (Hobie) Scholz

Kathryn - So sorry to hear about Howard. Please know I am thinking of you and sending our deepest condolences.
Tina and Todd Reichert

This man NEVER failed to speak to me and my husband, no matter where we ran into him. He was a "class act" Butch and Candy Willing

So much respect for this man, he was so kind to me when I was going through a bad time while attending my junior year in QHS. I am soon to be 66 yrs old and have never forgotten. Prayers sent to the family !

A good man, a good coach! May he Rest In Peace with Jesus.

Jim, Sheila & family,
I am so sorry for your loss. Keeping your family in our prayers

Jennifer I’m so sorry to hear if your dads death. He was a good man

Linda, so sorry to learn of you dad's passing. I always admired him.

The services for Howard have not yet been added. Please sign up below to be notified when the services are ready.

The attached photos are added to the memorial of Howard Dewell to help share their legacy.

Please help memorize Howard Dewell by recording your attendance below.

Thank you for sharing your memory of Howard