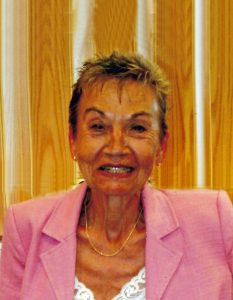 Barbara served her community as an employee of St. Mary's Hospital and later Blessing Hospital for 39 years, retiring in 2005. She was a devoted member of St. Francis Catholic Church. Most importantly, Barbara, or Ahmie, as she is affectionately called, dedicated her life as a mother, grandmother, great-grandmother, and friend to many. Her belief in the family bond was extraordinary. She was a role model to all whose lives she touched. Even in the end stages of her battle with Alzheimer's, Ahmie leaves a humble legacy of kindness, compassion, integrity and generosity for all of mankind. May we all choose to carry her legacy forward.

Memorials: In lieu of flowers, memorials may be made to Lynch Syndrome International or the Quincy Humane Society.


Hansen-Spear Funeral Directors are in charge of arrangements.

To Barb’s Family,
She will be fondly remembered by many St.Mary Hospital family friends in a special
way at our SMH semi annual luncheon April 9 as she is layed to rest . With all our sincere sympathy . God bless you all .
Nancy Friye & Linda Berry co-chairs of luncheon

Carrie, Tom & entire family we are so very sorry for your loss. Please know you all are in our thoughts and prayers. RIP

Please add my condolences to the many you will receive. As one of her oldest friends, I’m feeling such a loss this morning, and join in the many wonderful things those who knew her well had to say about her. She was a great lady, friend, Ahmie to all!

Barb was a wonderful lady who was always helping others. She will be missed

please Accept my deepest sympathy on the loss of your mother! Thinking of you!

My Deepest Sympathies to the Lane family. Barb was a Terrific Lady. Will keep you All in my thoughts and Prayers.

So sorry to hear of Barb‘s passing. My thoughts are with all the family. She was so very proud of her kids and you all took such good care of her. I have many good memories going to children’s mass with her at St. Peter’s Church and breakfast afterward at Hy-Vee. What a gracious lady.

Deepest sympathy to Lori and the rest of the family. I will add you to my prayers for peace and healing in this sad season of life.

The attached photos are added to the memorial of Barbara Ann Lane to help share their legacy.

Thank you for sharing your memory of Barbara