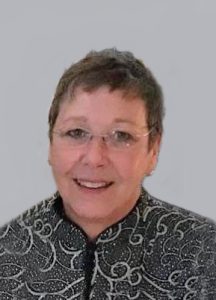 Katherine (Kathy) Gammon Holsinger, 61, of Quincy, and formerly of Keokuk, passed away on Tuesday, April 2, 2019 at her home in Quincy, IL.

Kathy was born on November 19, 1957 in Keokuk, IA to Jack M. and Helen Kelly Gammon. She graduated from Cardinal Stritch High School in 1976 and attended the University of Northern Iowa and Louisiana State University. Kathy married Dr. James F. Holsinger on August 24, 1999 in Chicago, IL; he survives.

Kathy was employed by the Hubinger Company in Keokuk as a data processing engineer then marketing director and as the vice president of commodities for Roquette America. She was also the practice manager for James F. Holsinger, M.D. in Keokuk and was most recently employed as the director of strategy for the Quincy Medical Group in Quincy.

During her career, Kathy served on many organizational boards. She was the first woman to be appointed to the Corn Refiners Association board in Washington, D.C. She was vice-chairman of the Renewable Fuels Association. Kathy was also involved in many charitable organizations including service to the American Red Cross board of directors and the Salvation Army board of directors, both in Keokuk. Growing up, Kathy became an accomplished pianist and organist. She played the organ for many years at St. Francis de Sales Catholic Church in Keokuk.

We just heard of Kathy's death on April 14. Kathy came from a great family and was one of our
first baby sitters. We just loved her like one of our own. She was a very hard working women and
one that would make any parent proud to call their own. Her ability to speak what she felt and desire to improve herself and those around her was very obvious. We are so sorry that this beautiful women had to leave this earth so soon. Our condolences to the family. God Bless. - Sue & Ed McGreevey

I grew up katy-corner from the Gammon family and can only say it was one of the best corners to be a kid in America. Kathy was an absolute delight to know and I’m so impressed with the career she made for herself – and her wonderful relationships with people of all ilk. So glad Jim and Kathy found one another and had many good years together. And a thumbs-up to Merle as well. The 3 Marion boys, Dave, Tom and Ben have conversed about what a great time we had with the entire Gammon Family. Julie and Craig, our hearts go out to you, Kathy was a Pistol, Pianist and a Prize and will be remembered dearly.

I have had the pleasure of knowing Kathy since the late 70’s. Such a wonderful Lady, Friend, and Business Associate. The world will be a lesser place without her. Jim, I will certainly miss her.

April 4, 2019
Jim and family, I send you my deepest condolences and sympathies. Kathy was a great lady. I truly respected and cared for her deeply. Our interactions started primarily in the business world and grew to a fine friendship and warm working relationship. I will remember her vividly and fondly.
May God Bless and Keep You All
Ray Washmera

Jim, Julie, Craig, niece and nephews and grands, Jim’s kids and all the grandkids, I am so sad for your loss of Kathy. She and I met when she was hired by Hubinger in late 1979. She was a very energetic hard worker and learner. We became good friends as well and then were married for 11 years. It was a magical time that I am very thankful for. When Kathy was offered the position in sales division, I encouraged her to make the jump, as I knew she could do it. And do it and progress into a sophisticated business woman she did! When Jim opened the clinic in Keokuk, Kathy took on the challenge of an entirely different type of business. Her computer background, and analysis skills contributed to much success. When she was overwhelmed with a couple of issues getting her arms around the business, she and Jim took me up on my offer to help out for a short time to get over the hump. Little did I expect this to turn into a part time job, that brought some awkwardness to the forefront with our past relationships. Initially I thought I might work a couple years, when suddenly it was nine years later and I felt it was time for me to retire. I’ve had a great life with Kathy a big part of it. She was a great lady, and shared her life and experiences with everyone. I’m very sad that her life was cut way too short. My thoughts are with you all.

Kathy was a wonderful person to meet and know her. I will remember the conversations when she sat in the copilot seat. May the Lord help you, Jim thru this tough time.

Craig, Mike and Pat Ruffolo say:
We were saddened to hear the news of Kathy’s death. Memories of her friendship on a personal as well as business level will always be with us.

She was a lady in every respect, with a warm infectious smile and laugh that always made you feel good. You and the family will miss her very much. We send our Deepest Sympathy.

Jim so sorry for your loss! Kathy was an awesome person to work for at Hubinger. I truly enjoyed our days there together. Our prayers go out to you!jom

Kathy was a wonderful friend , resourceful mentor and overall diplomat in a crazy corn syrup commodity business. She worked tirelessly to bring business clients to the negotiating table and resolved multimillion dollar business deals bringing prosperity to Keokuk and hundreds of employees that followed her lead. Her passing is so surprising. Hopefully special memories of her will be in the minds of her family and friends forever. Raquel and Peter Brooks

Jim I am so very very sorry for your Loss. Kathy will be Missed by Many People. She was a very Special Lady. I Loved seeing her an Daisy together. I remember when Kathy brought Daisy Home. She was a Big Puppy! My Prayers are with all of you! God Bless!

I am so very sorry to hear this…… My sympathy to all of you. Kathy was a very gracious woman who I am proud to have met……….Heather Ballew

It’s difficult to understand the way some things turn out. Kathy was a GREAT GAL. When we think of Kathy, it takes us back to our young days of being cool at the pool. Kathy, Julie and Dan, having not a care in the world.

I enjoyed working with Kathy. She is a gem. So sorry for your loss. My thoughts and prayers are with you. God Bless.
Kim Tournear

I am very sorry for your loss. Many prayers and good thoughts to all of you.

My deepest sympathy Julie and family. You are all in my prayers.

Jim, I am praying for you and your family at this difficult time. May the Lord bless you and keep you, may he shine his countenance upon you, and give you peace.
Helen Nigh (Brad’s Mom)

Dr. Holsinger we are so sorry for your loss. Please accept ourcondolences.
Tom Frey and Karen Basta

So very sorry to hear this. She was so supportive and kind when I received my cancer diagnosis. Prayers.

Sending prayers for you and your family as you face the difficult days ahead.

I’m so sorry for your loss Dr.Holsinger & family,you are in my thoughts and prayers.

I’m so sorry to hear of your loss Dr. Holsinger. Kathy was such a great co-worker and always enjoyed the parties at your house. Your in our thoughts and prayers.

Dear Jim, I am so saddened by Kathy’s death. She was such a wonderful women and such a kind friend to me while I was in Keokuk. And she and you were such great company. So full of ideas and fun. May her memory be a blessing. Your family is in my heart through this sad time. Warmest regards, Kathy DeVine

Awesome memories of our “Hubinger” days. She was an awesome woman that knew how to speak her mind. Prayers for your peace.

I am so sorry for your loss, Dr. Holsinger. I am praying for you and your family.
Tina Elschlager

So many wonderful memories of Kathy and Doc from working for them at the clinic in Keokuk! What an amazing woman! My deepest sympathy to you, Dr. Holsinger, and all of your family and friends. We will all miss her.
Sincerely with love always!
Mary Branham

The services for Katherine have not yet been added. Please sign up below to be notified when the services are ready.

The attached photos are added to the memorial of Katherine Gammon Holsinger to help share their legacy.

Thank you for sharing your memory of Katherine