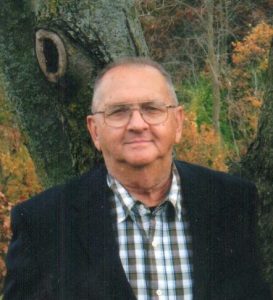 Orville was born August 6, 1933 in Marion County, Missouri, a son of Walter and Mary Drebes Mahsman. Orville married Mary Alice Schade on October 24, 1953 in Hannibal, MO. She preceded him in death on June 29, 1966. He then married Elizabeth Sexton Enslen on June 3, 1967 in St. James Lutheran Church in Quincy, IL by Rev. L. J. Wyssmann. She survives.

Orville worked as a machine operator for Packaging Corporation for 21 years. He spent the next 30 years as a driver for Sharkey Transportation. Orville was a member of Columbus Road Baptist Church.

In addition to his first wife, Orville was preceded in death by his son, Gary Lynn Mahsman; his parents; and four brothers: Donald, Lawrence, Alvin, and Gerald Mahsman.

Hansen-Spear Funeral Directors are in charge of the arrangements.

Dear Margaret,
I am so sorry to hear that your Dad has passed. You are in my thoughts and prayers.
Love,
Sherry Guthrie Hughett

My dear Elizabeth and family. i am so sorry for your loss, though we sorrow not as those with no eternal hope. Orville is heaven’s gain and we have the peace that passeth all understanding and the blessed hope of being reunited in heaven one day! May you feel God’s loving arms of comfort around you during this sad time in your life. A friend in our Lord Jesus, Rosemary

The services for Orville have not yet been added. Please sign up below to be notified when the services are ready.

The attached photos are added to the memorial of Orville Lee Mahsman to help share their legacy.

Thank you for sharing your memory of Orville